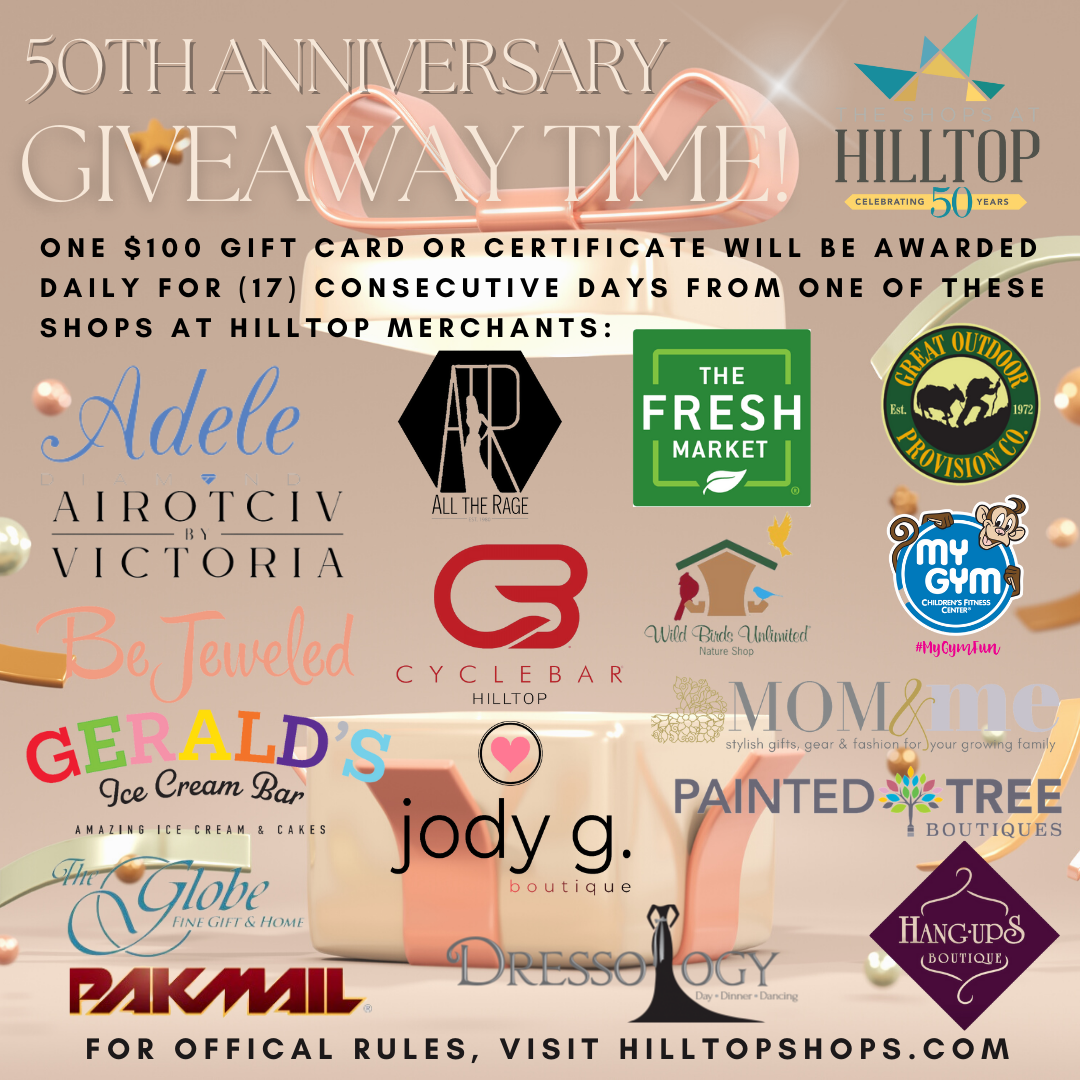 CONTEST SPONSOR
The sponsor of this Contest is The Shops At Hilltop, LLC (individually and collectively “Sponsor”).

ELIGIBILITY
No purchase or payment necessary. The contest is open to residents of the United States residing in the Hampton Roads area of Virginia. At the start of the Contest Period, registrants must be at least 18 years of age to participate. Employees of featured businesses and members of their immediate family, or those domiciled with, an employee of The Shops At Hilltop, LLC, or their respective affiliated or related companies, retailers at The Shops At Hilltop, service providers at The Shops At Hilltop, and the consulting, advertising, and promotional agencies and administrators used in connection with the Contest, are not eligible to participate. Immediate family consists of parents, siblings, children, and spouse.

PRIZES
There will be seventeen (17) prizes valued at $100.00 each consisting of one (1) $100.00 gift card or certificate to the selected featured merchant of the day. There are (17) participating contest retailers. Each retailer will be provided ahead of time the day/date their business will be the Instagram featured business of the day. One Instagram contest entry allowed per day. Each daily contest must be entered between 12:00 a.m. and 11:59 p.m. on the corresponding Contest day.

HOW TO PARTICIPATE
During the Contest Period, enter daily at Instagram.com/shopsathilltop by following the three (3) qualifying steps required for daily contest entry. The odds of winning the daily prize depends on the number of daily online ballots received during the daily Contest Period.

WINNER SELECTION
By 10/12/2022 at 12 p.m., all eligible daily entrants will be put into a random draw, with a winner selected by a representative of Hilltop Merchant Association, LLC. from among all daily Prize Entrants submitted and received in accordance with these Rules.
1. The winning name/Instagram handle will be emailed to the corresponding store, and the store will make a minimum of three attempts to contact the selected entrant for the Grand Prize in the three-day period following the random daily draw via Instagram.
2. Once winner is contacted, store will email them the DECLARATION OF COMPLIANCE AND RELEASE (“Release”) to sign, or store may present winnter a copy of the release to sign when they pick up their prize. The “Release” form MUST BE SIGNED, and no prize shall be awarded to any winner without this completed form.
3. Winner has 7 days from the day they are contacted to visit the store with their signed DECLARATION OF COMPLIANCE AND RELEASE (“Release”) to pick-up their prize.
4. On the 8th day if the prize has not been picked up, the original winner will be disqualified as the official winner, and a new winner will be drawn, and the process will begin again.
5. In the event the store is unable to contact the selected daily entrant in such three-day period, such eligible entrant may be disqualified at Sponsor’s sole discretion, and Sponsor may, at its sole discretion, hold another random draw to select another entrant from among the remaining Prize Entrants, in which event the provisions of this section will apply to such newly selected entrant. If an eligible winner has not been confirmed as a winner by the end of the contest, 10/12/2022, at Sponsor’s sole discretion, such eligible winner may be disqualified and the Prize may not be awarded.

PRIZE WINNER CONFIRMATION PROCESS
1. Before being declared a confirmed a Prize winner, the potential winner must confirm compliance with these Rules, (ii) acknowledges acceptance of the Prizes as awarded, (iii) releases the Contest Sponsor its affiliates, subsidiaries, prize suppliers, advertising/promotion agencies, and any entity involved in the development, production, implementation, administration, judging, or fulfillment of the Contest, and each of their respective officers, directors, employees, agents, representatives, successors, and assigns (collectively, the “Released Parties”) from any liability in connection with this Contest, and (iv) confirms the winner’s agreement to the publication, reproduction, and/or other use of his or her name, address, voice, statements about the Contest, and/or photograph or other likeness without further notice or compensation, in any publicity or advertisement carried out by or on behalf of Sponsor in any manner, including, but not limited to, print, broadcast, and/or the Internet (including, but not limited to, social media).
2. If an eligible Prize Winner: (a) fails to correctly complete all (3) contest entry steps, (b) fails to sign the declaration of compliance and release, along with the properly executed Contest documents as outlined herein, (c) cannot accept, or is unwilling to accept, the Prize as awarded for any reason, and/or (d) is determined to be in violation of these Rules, all as determined by Sponsor in its sole discretion, he or she may, in Sponsor’s sole discretion, be disqualified (and, if disqualified, will forfeit all rights to the Prize), and Sponsor reserves the right, in its sole discretion and time permitting, to select an alternate eligible entrant for the Prize in accordance with the procedures outlined in these Rules, in which case the foregoing provisions of this section will apply to such newly selected potential winner of the Prize.

This Contest is subject to all applicable laws, and the Contest and the interpretation of these Rules are governed by the laws of the United States and Virginia. The decisions of the Sponsor with respect to all aspects of this Contest are final and binding on all entrants without right of appeal. Anyone determined to be in violation of these rules for any reason is subject to disqualification in Sponsor’s sole discretion at any time.
The Released Parties will not be liable for the failure of any entry and/or other information to be received, captured, or recorded. An attempt to undermine the legitimate operation of this Contest may be a violation of criminal and civil laws, and should such an attempt be made, Sponsor reserves the right to seek remedies and damages as permitted by law.
Sponsor reserves the right, in its sole discretion, to cancel, amend, or suspend this Contest, or to amend these Rules, without prior notice for any reason.
By entering this Contest, each participant expressly consents to Sponsor, its agents and/or representatives, storing, sharing, and using the personal information submitted only for the purpose of administering the Contest and in accordance with The Shops At Hilltop’s privacy policy, as applicable, unless the participant agrees otherwise.
By participating in this Contest, each participant automatically accepts these Rules and automatically releases the Released Parties from any liability arising in connection with the contest.
In the event of any discrepancy or inconsistency between these Rules and other materials, disclosures, or statements (including, but not limited to, Contest-related advertisements), the terms and conditions of these Rules will prevail.